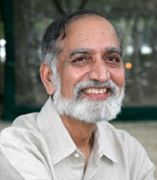 Kiran Karnik is widely recognized for his work in the IT sector, as President NASSCOM from 2001 to 2008. He has been on many key government committees, including the Scientific Advisory Council to Prime Minister and the National Innovation Council. Columnist and author, his books include “eVolution: Decoding India’s Disruptive Tech Story” (2018), “Crooked Minds: Creating an Innovative Society” (2017) and “Coalition of Competitors: The Story of Nasscom and the Indian IT Industry” (2012). As CEO of Discovery India (1995-2001), he launched Discovery Channel and Animal Planet in India and South Asia. Earlier, he spent over two decades in ISRO and was deeply involved in the use of space technology, especially for education and development, including the path-breaking Indo-US Satellite Instructional TV Experiment (SITE) and the Kheda TV project. He was a Director on the Board of Reserve Bank of India (2011-15), and currently chairs its IT subsidiary, Reserve Bank IT Pvt. Ltd. He was the Chairperson of Oxfam India (2004-19). He is currently the Chairperson of Indraprastha Institute of Information Technology, Delhi and HelpAge India. Karnik has been conferred many awards, including the Padma Shri.